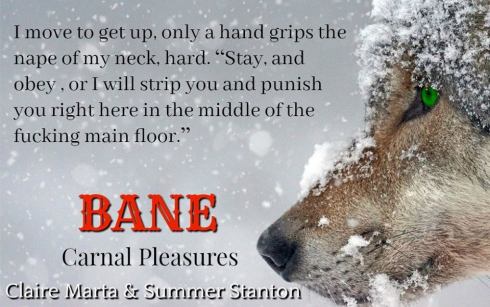 “I don’t think you could dominate or submit to someone if you don’t understand both sides of it.”

What would you like readers to know about Bane and the Carnal Pleasures series on the whole?

Bane is a book about submission, about preconceived notions, about finding strength in your weakest moments. We want readers to be able to see themselves in the characters and their hurt and realize that the pain they have doesn’t have to define them, but they can use it to their advantage and take control in ways they didn’t think they could before.

Carnal Pleasures as a whole is about letting yourself be yourself. We have a tendency to let life and it’s stressors hold us and prevent us from just enjoying life. When you enter Carnal Pleasures you’re able to let your outside self go and shine with the you that lives on the inside.

The supernatural creatures that go to Carnal Pleasures are able to take more than a human is. One of the early interactions between Bane and Adam is a rather harsh punishment. It’s something that wouldn’t happen in real life because of the severity of it. There are limits and Adam crosses every one of them. But he’s able to do that because unlike a real-life human Bane is built to withstand it.

Besides going through and getting a sub’s limits a good Dom will assess the situation and ease them into the lifestyle. Much like with Adam they will take things slow and find what piques the sub’s interest. Unlike with Adam, they won’t be as heavy-handed with their punishments. That’s not to say there won’t be any or that they won’t have high expectations. Like Adam tells Bane, there is no failure unless there’s no trying. A Dom will want their sub to try to push their limits and explore their likes and dislikes.

Trouble might come if the Dom tries to push too hard too soon, which for some people works, but only if they know what they want, but don’t know how to achieve it. Or if they don’t pause to consider the sub’s limits. While it’s okay to push a sub to the edge of their limits, it’s dangerous to go past that line. There’s always a reason a sub has the limits they do and disrespecting that is a quick way to hurt someone, both psychologically and physically.

Adam, the Dom assigned to Bane, calls him a pet right from the start, though Bane actively dislikes it at first. It’s common that Doms want to be addressed as sirs or masters, but what about the way they call their subs? Should it be something negotiated in the beginning or not?

I don’t think so. Calling a Dom sir or master or their preferred term is a way to mark them as the Dom. Titles are used to establish, not only who is in charge, but it’s respectful.

Pet names in any relationship should be used because that’s what one partner feels is right for the other. So with Adam calling Bane pet, it’s because that’s how he sees him. A pet that he needs to tame.

There may be a word or name that the sub can’t stand or it’s triggering for them, which will need to be discussed beforehand, but other than that I think the use or lack of use of a pet name should be something organic and what feels right.

Bane sees submission as weakness at first, and his pack mentality doesn’t allow weaknesses, not in an Alpha werewolf. But it might be hard for any strong person to submit to someone, even if they secretly crave it. What could they do in this case?

If someone is curious but afraid of looking “weak” I believe they should try it. Just a little something, not a big scene, but after doing their research, talking to others in the community, they should try. Giving up control is scary, but you won’t know how you feel unless you try. And always remember you have the power to safeword and stop at any time. The control is with the sub, even when they’re putting everything in their Dom’s hands.

I find it interesting that Adam says you cannot learn how to treat a sub unless you were once one yourself. Do you think it’s important for Doms to try subbing, even if they aren’t into it?

I think it is. Even if a Dom is unable to try subbing, they should understand the psychology of Domination and submission. As a switch myself, I don’t think you could dominate or submit to someone if you don’t understand both sides of it. Subs need to understand the gift they’re handing over and what their Dom will get out of it. And a good Dom will understand the courage it takes to handle control over to someone.

If you don’t understand the appeal to the other person, the why and how they’re able to do what they do, you will miss important cues. You may not be able to step into the other person’s shoes, but understanding what it takes for them to be there will make the experience for both that much better.